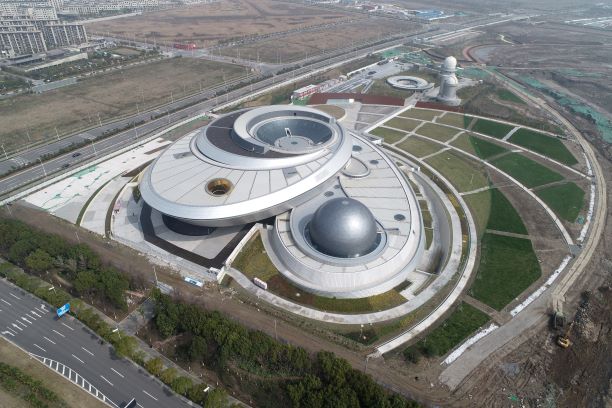 Recently, Shanghai Astronomy Museum (the branch museum of Shanghai Science & Technology Museum) has passed the comprehensive project acceptance process and is entering the key stage which focuses on exhibition design development and the construction of ornaments. The museum will be open to the public next year.
Shanghai Astronomy Museum has a rather complex architectural design, and thus its construction is of great difficulty. Starting from November 2016, the construction headquarter has overcome numerous problems and finally realized the perfect combination of architectural structure, function, and appearance. In order to create the best sensation of immersing in the universe, almost all the concrete and steel structures in the museum are irregularly shaped, and many technical problems in space structure during the construction process have been tackled. The unique architectural design of Shanghai Astronomy Museum, originated from the designer's formal abstraction of cosmic orbital motion, not only shows the astronomical principles but also connects with the idea of the orbital period, making the entire building an astronomical machine that can track the movements of the Earth, the Moon, and the Sun.
Shanghai Astronomy Museum will restore the beauty of the “real” starry sky for the audience. Visitors are accessible to the multi-band observation of the sun during daytime with the assistance of the specially set “The Sun Tower”, which can also display HD images of sunspots, solar prominence, and solar flares via its professional optical equipment. At night, the one-meter telescope enables the audience to see the Moon, planets, and other extraordinary, deep-space objects with an HD view. The Planetarium Hall introduces and develops the world's most advanced optical planetarium, which projects the high-precise simulation of the starry sky, retaining the background color of space to the greatest extent and matching the scene with various natural acoustic effects. In this way, the audience will experience the thrilling and vivid starry sky. Based on the framework of "Big History + Big Structure", Shanghai Astronomy Museum will exhibit a panorama of the outer space, create a multi-sensory exploration journey, and help the audience to obtain a comprehensive view of the universe.
Targeting at the top international planetarium, the construction of Shanghai Astronomy Museum is now in the stage of intensive design development. The museum endeavors to grasp the construction quality, down to every link and detail. Ingenuity is required to realize dreams; Shanghai Astronomy Museum will be a boutique project, a satisfactory project, and a model project.