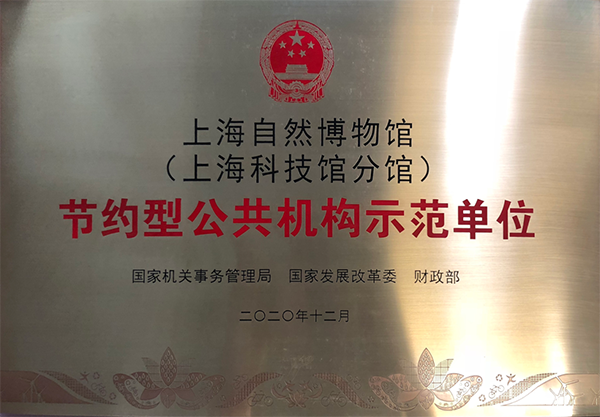 After the State Government Offices Administration, the National Development and Reform Commission and the Ministry of Finance started the selection of the establishment of demonstration units of economical public institutions and the energy efficiency leaders from 2019 to 2020, the Party Committee of Shanghai Science and Technology Museum attached great importance to related issues. According to the deployment requirements of the party Committee of the museum, the operation and maintenance center of Shanghai Natural History Museum proactively implemented the relevant evaluation work. Through the implementation of a variety of effective management measures and methods, the energy consumption per unit building, per capita energy consumption and per capita water consumption of Shanghai Natural History Museum were significantly lower than the average energy and resource consumption of the same type of public institutions, with exceeding the standards consistent with the "National Demonstration Unit of Economical Public Institutions". Meanwhile, during the actual establishment process, the working features and highlights of Shanghai Natural History Museum were fully displayed, which was highly recognized by the on-site evaluation and acceptance team of State Government Offices Administration.