A different physics class in SSCF 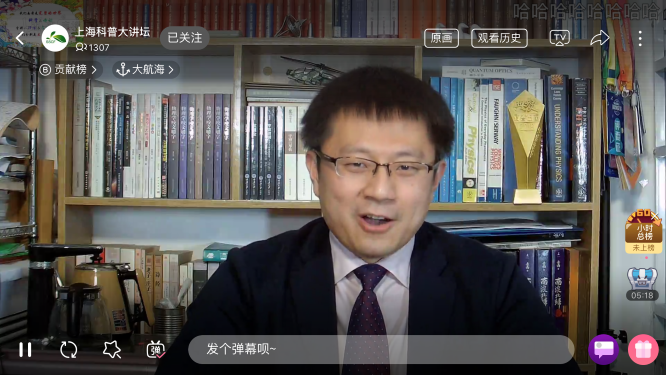 On the evening of May 17, Dr. Chen Zheng, a teacher of the National Teaching Center for Experimental Physics of Beijing Jiaotong University, was invited to give the 140th lecture about physics at the SSCF on the International Museum Day. In the class, complicated concepts in science aside, Dr. Chen started from ancient Chinese poems which are familiar to all primary school students. Then he talked about the natural phenomena and scientific principles lying behind the poems.

Dr. Chen believes that today's world is filled with fragmented information, and it is difficult to attract people with complex science, so how to catch people's attention is an important part in carrying out science communication. Only by making science fun can scientists reach a wider audience, especially the younger generation, and interest them into joining the scientific exploration. At the same time, Dr. Chen is also thinking about how to break the current rigid understanding of "science", which is more than dead numbers, formulas and graphs, and how we can better integrate it with the real life.

When he is working on science communication, Dr. Chen has been devoted himself to breaking the boundaries between different subjects, such as Chinese, history, and science. Through the multidisciplinary interaction, he tries to combine the sentimental literature with the rational scientific thinking, and combine the invisible scientific principle with the visible real life. Each subject interprets the nature from a different perspective, and if we can master multiple perspectives we will have a better understanding of the nature and science. For example, the poem lines "Lying on the boat, I saw that the clouds in the sky did not move at all; I did not know that the clouds and I were both heading east" and Galileo's Salviati's Ship share a basic principle in physics - relativity, which is also the source of the famous modern theory of relativity.