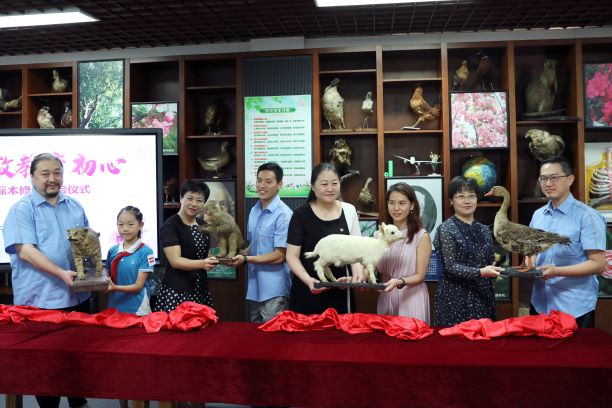 Lin Youyu, 102, is among Shanghai’s first batch of special-grade senior teachers. On September 10 Teacher’s Day, he received a special holiday gift from the Shanghai Natural History Museum (a branch of Shanghai Science & Technology Museum) – 4 pieces of well-restored animal specimens in fine fettle. At the simple specimen handover ceremony, Lin Youyu expressed his gratitude to the museum through a video. At the end of the event, the Shanghai Natural History Museum also gave a specimen-making experience class for 16 high-level graders from primary schools.
During the long-lasting plum rain season in early July this year, Lin Youyu was very worried about the “elderly” teaching aid specimens that he made for his school. He called on professionals to participate in the restoration of the animal specimens through the media to arouse more children’s interest in natural science. After thorough discussion, the Specimen & Model Making Center of the Shanghai Natural History Museum decided to repair four specimens including a white-fronted goose, a macaque, a leopard cat and a sheep for free, which embodies the museum’s social responsibility and social value as a public welfare museum. According to the different conditions of each specimen, they formulated a series of professional restoration plans such as specimen freezing, insect and mold prevention, hair color restoration, and facial trimming. The exquisite clean-up and restoration by the specimen experts have been highly praised by the school.