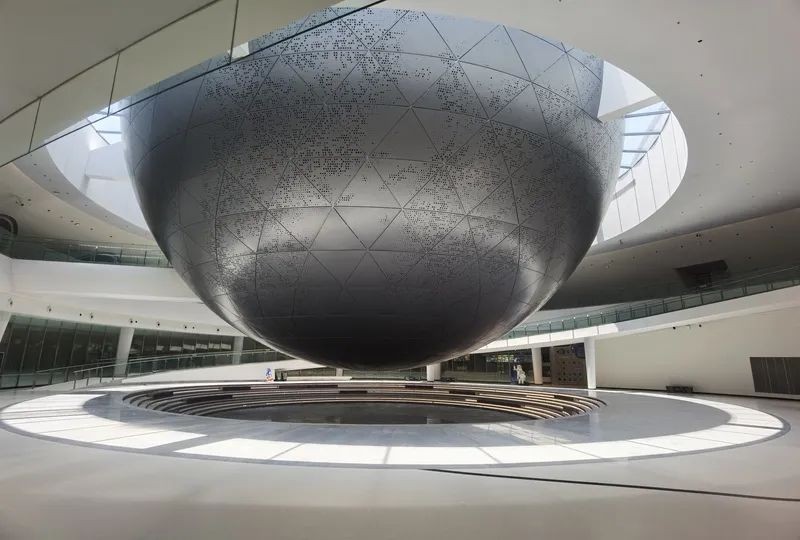 On the morning of June 22, 2022, Shanghai Astronomy Museum held a live broadcasting on the summer solstice, called "Radiance on the Summer Solstice". At about 11:54 at noon, sunlight penetrated through the glass around the dome theater and was projected on the gray marble floor below the dome theater, forming a complete ring of light. As beautiful and stirring as the annular eclipse, it visually presented the effect of direct sunlight at noon on the summer solstice.

Shanghai Astronomy Museum is the museum with the largest construction scale in the world. It consists of a main building and several auxiliary buildings, including Wangshu Observatory, Xihe Solar Tower, Space Exploration Camp. The main building forms the "orbit of celestial body" with a beautiful spiral shape, and the three circular elements of the Oculus, the Dome Theater and the Inverted Dome form the "three-body" structure, which jointly interprets the basic law of the movement of celestial body.

The Dome Theater has an outside diameter of 30 meters. If the Dishui Lake is assimilated to the sun, the Dome Theater can be regarded as an earth scaled down. The super high-definition screen in the theater has a resolution of up to 8K, which can bring the audiences a sense of immersion in the universe. Outside the theater is a ring through which sunshine spills into the audiences' rest area beneath the theater. "According to architectural design, at midday on the summer solstice, sunshine forms a complete halo in the audience rest area. Lin Qing, Director of the Astronomical Research Center of Shanghai Astronomy Museum, said.

"Midday is actually an astronomical concept, not meaning 12:00 at noon, but the time when the sun shines directly on the meridian." Shi Wei, Director of the Department of Network Science Popularization of the Exhibition and Education Center of Shanghai Astronomy Museum, told the audiences. According to the measurement and calculation, the midday on the summer solstice at the location of the Shanghai Astronomy Museum is about 11:54, which means that at this time, the halo formed by the sunshine completely coincides with the gray circle on the ground and present an effect of annular eclipse.

In addition to enjoying the light and shadow picture of "Radiance on the Summer Solstice", audiences also gained the knowledge of solar terms and astronomy in the live broadcast. The summer solstice is defined astronomically as when the sun reaches 90° of the celestial longitude. That is to say, the summer solstice is actually one moment in time, and the time of summer solstice this year is 17:14 on June 21.

After the summer solstice, the position where the sun directly shines the earth always migrates southward, the height of the midday sun decreases day by day, and the daytime in the northern hemisphere shortens day by day, so there is a Chinese old saying "the days start to get shorter after people eat noodles on the summer solstice".