"Science Show" of Daily Life at Home in Cloud Streaming 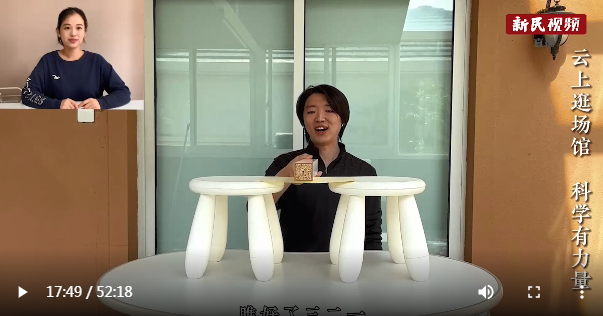 On May 14, 2022, the fifth session of the "Science Popularization at Home and Mobile Module Hospitals" lecture organized by Shanghai Science and Technology Museum and Xinmin Evening News was on air on many platforms. Science teachers Gong Hao and Chen Yanglin from Shanghai Science and Technology Museum and science popularization expert Wu Yuren, known as the "Grandma Wu Who's against Excessive Exercise" delivered an online science show, guiding students to conduct scientific experiments easily at home.

The two science teachers twisted a paper slip by 180 degrees and pasted one end to another to make a ring. They further twisted the ring for 180 degrees for two times, and then cut each ring from the middle. Surprise! Here is a scientific miracle! Each cut gets you different rings. Some paper rings get bigger, and some are "hand in hand". The 72-year-old professor of physics Wu Yuren from Tongji University has the "scientific secret" to attract one million followers, such as demonstrating the Chinese "Sky Eye" with iron pot and simulating cosmic rays with brooms. As the "bonus" guest for this session, upon appearing on the screen, Grandma Wu became the focus of the show. This time, she brought a normal CD and magically created a colorful world with it that's equal to the effect of grating of different models of sensors.

The young viewers followed the teacher to make Mobius Rings, observe mineral water bottles, and make "rainbow" with CDs. While experiencing the physical knowledge in person, they were inspired to be curious and explore the unknown world. Their anxiety of being quarantined at home has been relieved.