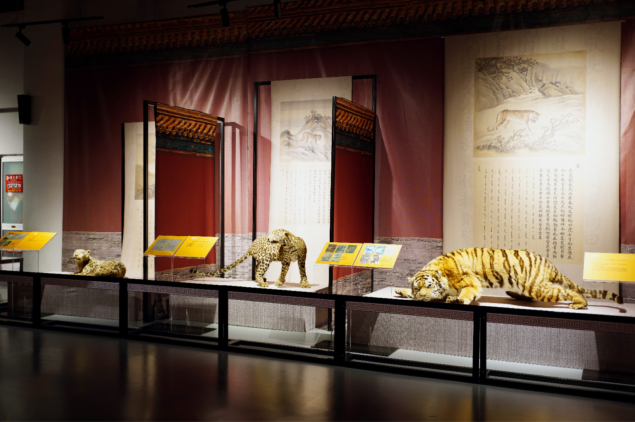 On January 13, 2022, the Exhibition of Catalog of Animals Collected in the Qing Palace co-hosted by the Shanghai Science and Technology Museum and The Palace Museum is opened in the Shanghai Natural History Museum. In the Exhibition, specimens are combined with cultural relics and ancient paintings to review and scientifically interpret the Catalog of Animals Collected in the Qing Palace by concrete images and direct comparison, realizing the cross-border integration of science and arts. The ancient animal paintings of China, biological paintings of the Catalog of Animals, and the modern primary color paintings of animals are compared to directly express the development of Chinese animal science paintings. The images of animals are vividly presented via multimedia, realizing the atmosphere of motion in quiescence.

The Exhibition is composed of three exhibition segments, i.e., Opening the Door of imagination and Curiosity, Real Animals, and Dancing with Animals, creating the Qing Palace atmosphere by imitating the palace walls of the Palace Museum. Red, yellow, brown, and tan are used as basic tones, especially red and yellow as the main tones of decoration, which are consistent with the colors of the original works of the Catalog of Animals. In addition, the overall is relatively dark but partial places are illuminated, with emphasis on paintings and specimen exhibits.