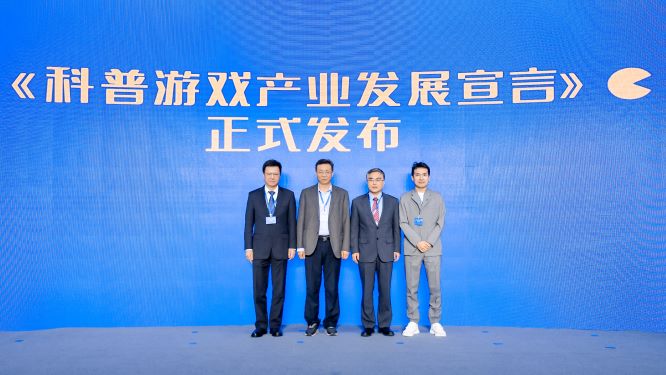 On April 10, 2021, the China Science Game Conference themed “Innovation and Transformation of the Science Popularization Industry” was held at SSTM, which was the first summit in the field of science games in China. It focused on the redefinition, practical scenarios and development trends of science games, necessary policy support, possible problems and countermeasures, trying to explore the direction for the future development of science games. New thoughts, new creative ideas and new works of science games, and Declaration of the Development of the Science Game Industry were released at the conference. More than one hundred representatives from government agencies, scientific research institutes, science popularization venues and game enterprises attended the conference through online and offline methods.
The Declaration of the Development of the Science Game Industry was released as one of the important results of the conference. From the perspective of the integration of technology and culture, it focuses on the history of games, the role of science popularization, the core of education, venue applications and digital cultural and creative industries, and further clarifies the connotation of science games. A consensus on the goals of science games in science popularization and education has been reached. Efforts will be made to build a diversified and integrated system for the research and development of science games, promote the transformation of scientific and cultural production methods through scientific and technological innovation, and contribute to the construction of a digital China and a scientific and technological power. Meanwhile, six thematic seminars, three sharing seminars and roundtable dialogues themed “expressing new thoughts”, “sharing new ideas” and “publishing new works”, were held to encourage the audience to conduct thought-provoking and profound professional discussions.

In recent years, SSTM has actively utilized internal and external resources, continued to make explorations and attempts in science games. Besides, it developed nearly 30 mini science games such as Jigsaw Puzzle of Birds, Friction Elf, Ecological Functions of Rats, and Explore the Wonderful World of Whales, which were used in exhibitions and educational activities, setting a precedent for science popularization venues to explore and promote science games in an all-round and multi-dimensional way.