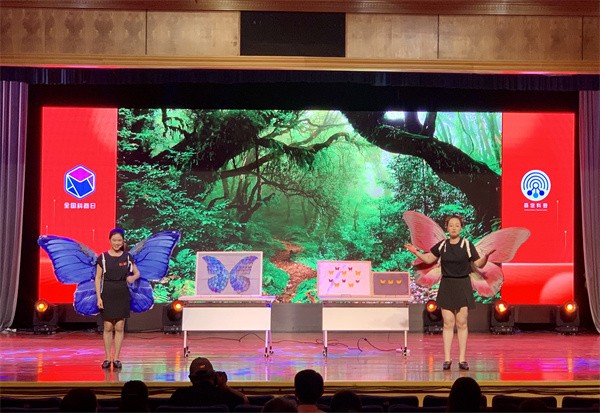 On September 18, 2022, at the launching ceremony of the "National Science Popularization Day" in Jiading District in 2022, Shanghai Science & Technology Museum gathered three science performance teams, each of which has their own characteristics, to jointly present a cool, wonderful and interesting science performance show to the audience from the new city at the scene to present them with the latest scientific knowledge and the most fashionable interpretation method in "zero distance". This is also the first time that the science performance of the subproject "Science Popularization into Five New Cities" of Shanghai Science & Technology Museum showed in the new city.

The scientific experiment--Power of Structure brought by the Exhibition and Education Center of the Shanghai Science & Technology Museum vividly demonstrated the unexpected strange power of objects endowed by various unique structures with unique topics, wonderful demonstrations and full interaction. Through four sets of interesting scientific experiments, the scientific experiment--the Light and Shadow Magic of Butterflies presented by the Exhibition and Education Center of the Shanghai Natural History Museum shows the microstructure of lepidoptera, the different physical characteristics of pigment color and structural color, as well as macroscopic manifestations such as color change, waterproofing, and heat insulation, stimulating the audience's interest in loving nature, exploring nature, and understanding the relationship between man and nature. The finale of the scientific experiment--Vibration Energy performed by the Planetarium Exhibition and Education Center of the Shanghai Astronomy Museum tells the audience that sound waves can transmit energy through space to make the tuning fork vibrate, can change the air density distribution to drive sound vibration, and can also superimpose each other to produce wonderful phenomena with the stories of science prop producers and businessmen. On the same day, the Museum also donated 5 DVD sets of "China's Rare Species" series of popular science films and 3 sets of Academicians Take You to Explore series of popular science picture books to the Jiading District Science and Technology Commission.