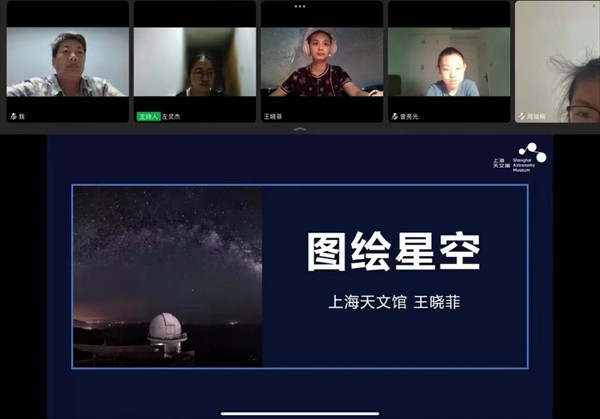 From the constellation origin, Wang Xiaofei explained the evolution of the constellation, the similarities and differences between Chinese and Western constellation systems, and the differences between time and region of star observation in detail to students, and opened a vast star picture for teachers and students in front of the screen. At the end of the course, Wang Xiaofei quoted General Secretary Xi Jinping 's reply to youth in the aerospace sector on the eve of the May 4th Youth Festival to encourage everyone to always maintain their curiosity, continuously explore, step down-to-earth, and continue to move towards the ambitious goal to look up at the starry sky. This activity not only cultivates the curiosity of students to explore the unknown world, stimulates their determination and enthusiasm to contribute to the construction of scientific and technological power, but also further plays the position role of the Youth Center of the astronomy museum.

Since the outbreak occurred in Shanghai in March of this year, under the careful deployment of the Party Committee of Shanghai Science and Technology Museum, the Exhibition and Education Centers of the three museums have taken the initiative to launch a series of activities of "Science Popularization Double Entry" and develop new online courses. The League Committee of Shanghai Science and Technology Museum took the initiative to take the lead in helping the promotion of the "double reduction" public welfare service items of the Youth Center of Shanghai Astronomy Museum in the form of online "Lessons into Campus". In the future, the League Committee of the museum will further strengthen the cooperation and exchange with the Communist Youth League in the new area of Lingang, link the relevant business departments of the astronomy museum to further expand the coverage of the "double reduction" service, and unite the youth forces to compile a new chapter on the overall situation of the CYL service.