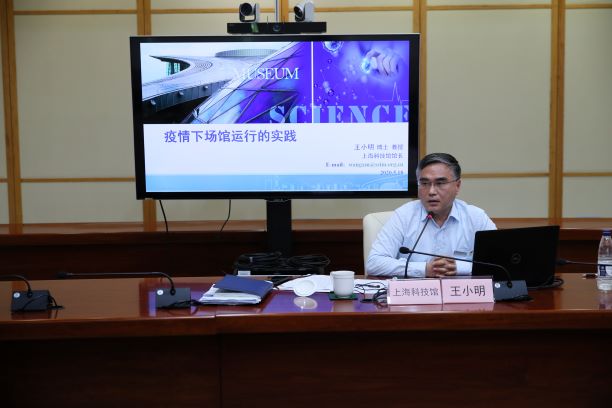 On May 18, the International Museum Day, Wang Xiaoming, curator of the SSTM, was invited to attend a summit dialogue for curators of science education museums, at which he made a keynote report. The theme of the conference, which was held online, was about epidemic prevention and control and the re-opening of science and technology museums or centers. With great support from the Science Alliance of Yangtze Delta, the Alliance of the Beijing-Tianjin-Hebei Science Education Venues, and the Alliance of the Guangdong-Hong Kong-Macao Greater Bay Area Science and Technology Museums, the conference was held simultaneously in Beijing, Shanghai and Guangzhou.

The summit dialogue focused on promoting the re-opening of science and technology museums under normalized epidemic prevention and control, and Zhang Yu, an associate researcher at the Chinese Center for Disease Control and Prevention, Lu Jingui, director of the Guangdong Science Center, Wang Xiaoming, curator of the SSTM, and He Suxing, director of the Beijing Science Center, gave keynote speeches online around the topic of continuing with the normalized epidemic prevention and control and re-opening science and technology museums in an orderly manner. Ren Haifeng, deputy director of the China Soong Ching Ling Science & Culture Center for Young People, and Qi Rui, executive deputy director of the Beijing Planetarium, joined the discussion and answered questions from the audience.
Curator Wang Xiaoming adopted the new ideas of social participation, market-oriented operation, legal constraints, international exchange, and information support, to explore the founding mission and core competitiveness of science communication venues, which seek opportunities and development based on the characteristics of the era, and expounded the development direction for science and technology venues during the post-epidemic period from the four aspects of putting people in the first place, promoting online and offline integration, adapting to the combination of culture and tourism, and strengthening sharing among the alliances. He also gave his opinions and prospects about further cooperation among the Science Alliance of Yangtze Delta, the Alliance of the Beijing-Tianjin-Hebei Science Education Venues, and the Alliance of the Guangdong-Hong Kong-Macao Greater Bay Area Science and Technology Museums.